Each year during the holidays, a committee of FleetNet America® employees plans an activity to aid a charity.

For 2017, the committee decided to participate in Operation Christmas Child. The program distributes shoeboxes filled with small toys, school and craft supplies, personal care items such as toothbrushes and bar soap, and accessories such as T-shirts, sunglasses and hair clips to needy children around the world.

Over two months, employees at the Cherryville, North Carolina, campus competed in departmental challenges to see which department could collect the most boxes and which teams could win a “Penny War,” which raised money to cover shipping costs for the shoeboxes.

The committee set a goal of 150 filled shoeboxes — but FleetNet employees far surpassed that number. They filled more than 680 shoeboxes, and the Penny War raised more than $3,000 for shipping costs.

In late November, a group of 16 FleetNet employees plus seven family members spent an evening volunteering at an Operation Christmas Child processing center in Charlotte, North Carolina. Volunteers inspected the gifts, sorted any inappropriate items, separated boxes by age and gender, and then boxed shoeboxes in designated cartons for shipping.

“Our employees truly went above and beyond with this project,” said Heather Dean, FleetNet director of marketing and sales operations.

The Christmas committee was inspired by a 2016 Skill & The Will article that detailed Operation Christmas Child and its involvement with ArcBest® and ABF Freight® to transport the shoeboxes, Dean said.

Since 1993, Operation Christmas Child has distributed more than 146 million boxes to more than 150 countries and territories. Every year, more than 100,000 volunteers participate. The program is sponsored by the nonprofit Samaritan’s Purse, a nondenominational Christian organization providing spiritual and physical aid to victims of war, natural disasters, disease, famine, poverty and persecution in over 100 countries.

FleetNet and its Operation Christmas Child efforts also were featured in two local newspapers, the Gaston Gazette and the Cherryville Eagle. 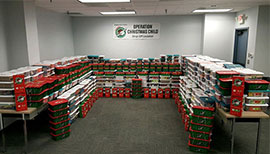